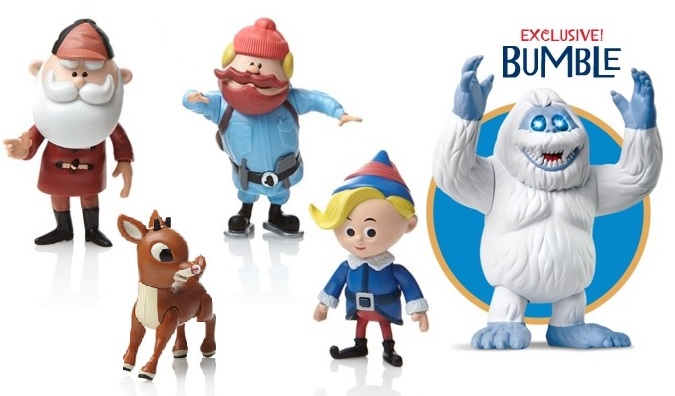 A few weeks ago, I happened to see the Rudolph the Red-Nosed Reindeer “50th Anniversary” edition DVD box at Costco.  Since I’ve already got the DVD, I almost walked right past it – but something caught my eye.  It was the four “talking” figurines packaged as part of the set (with the fifth figure, Bumble, attainable for free by online order)

With a toddler at home, and a baby due in April, I considered it an investment in holiday decor – and scooped the set.  I would soon remember why these toys got my attention.

When I arrived home and followed the instructions to order the Bumble figure, I realized that the website, Rooftop Collectables, was very familiar.  Suddenly, I recalled the project I recorded in June of 2013, for a company called Rooftop Brands – and that project was a series of voice overs mimicking the best known lines delivered by Santa, Yukon Cornelius, Rudolph and Hermey the Elf.  Some of the same lines playing from these tiny toys!  So does this mean that I can someday reveal to my kids that I’m a Christmas legend?  Not quite.

As it turns out, the recordings featured in the Rudolph the Red-Nosed Reindeer figures are the official, licensed audio clips from Rankin/Bass.  But, in checking with my client, he confirmed that the audio was indeed “placeholder” narration, used in the prototypes of these toys, which were shown in meetings and used to secure the licensing, buyers, manufacturing and distributors over a year ago.

In fact, here are a few samples, as recorded:

As for the project, I’ve produced a number of similar pieces in the last year.  Stand-in or place holder audio for products (which I cannot name due to confidentiality clauses) are some of my favorite jobs – and the folks with whom I’ve worked with on those projects have been fantastic too!

If you’ve got a similar need, for a stand-in or placeholder voice to help you secure licensing for the real deal, send me a note.  I’d love to discuss what I can do to help.