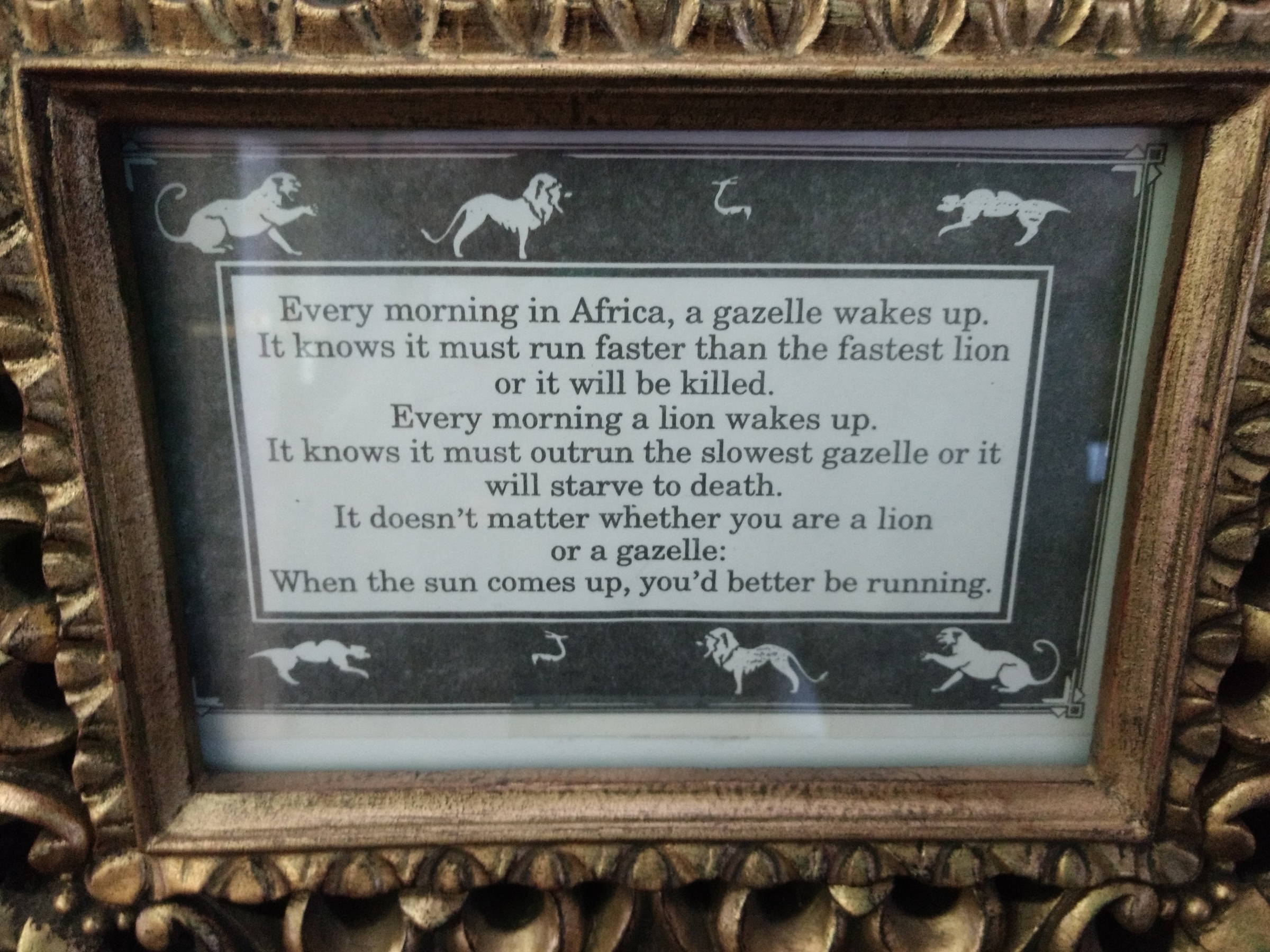 After my father died in 2009, I sat in his weathered office chair in my parents home-office and looked at his desk.  His desk was still stacked with papers and lists of things he had been meaning to sort out and get done around the house.   His handwriting was tiny and difficult to read, but “set-up for Steak Supper at the Legion Hall” was quite legible.  My dad was a dependable guy.  If Wayne Stephens said he was going to be somewhere or do something, you could count on him.  He always had an admirable sense of what it meant to serve others.  I hope I’ve honored him in that regard.

Taped to a file cabinet to the right of his desk, was a small photo-copied slip of paper.  Images of African wildlife adorned the borders of this little sign, which read:

I asked my mom if I could have the sign (she said yes), and I took it home and put it in this cheesy, opulent frame.  It hangs on the wall in my studio just to the right of my desk. My initial thought about the sign was that it emphasized the nature of self-employment.  If you want the freedom that self-employment can bring and financial security, then you have to work at it every single day.  You have to treat every client, every project, as the most important thing you’ve ever done.

After a few weeks of seeing this sign every day, I began to wonder about the analogy itself.  I question the logic in spending every moment of every day terrified of being eaten by a lion.  I’m great under the pressure of an impending deadline, but nobody does great work when they’re constantly gripped by fear of failure (let alone fear of being eaten alive).

Eventually, I just saw the sign as a reminder that to attain the things you need to survive, you must be prepared to exert effort.  So, when I look at a full studio schedule and think, “whoa, that’s a lot of stuff”, I also say, “Let’s get to it!”.

Recently, I looked into the origins of the sign, and found that author Thomas Friedman included the Fable of the Lion and Gazelle in his 2005 book, “The World is Flat”.  In his book, Friedman notes that he saw the proverb (printed in Mandarin) posted to the wall in an auto parts factory in China.

With this knowledge, I began to question the underlying purpose of the sign.  I’ve never been keen on motivational posters, and now I’m imagining laborers toiling in long shifts, under unsafe conditions, staring at this sign with scorn and misery.  At this point, if this thing didn’t belong to my dad, I’d replace it with a picture of my Dad.  Come to think of it, I should.

Now I’m wondering if this blog post is a little too forced.  I do have days where I would definitely be eaten by that lion, so let’s not pretend I’m a magical gazelle who goes super fast and does voice acting.  Nonetheless, I’m doing something a bit more personal with this post.

Yes, it’s as challenging as it is rewarding to be self-employed.  But, I don’t think I need a sign to keep me motivated to pursue doing great work.  I have my family to remind me what is (and isn’t) important.  Hey, maybe that’s what dad meant for me to figure out anyway.